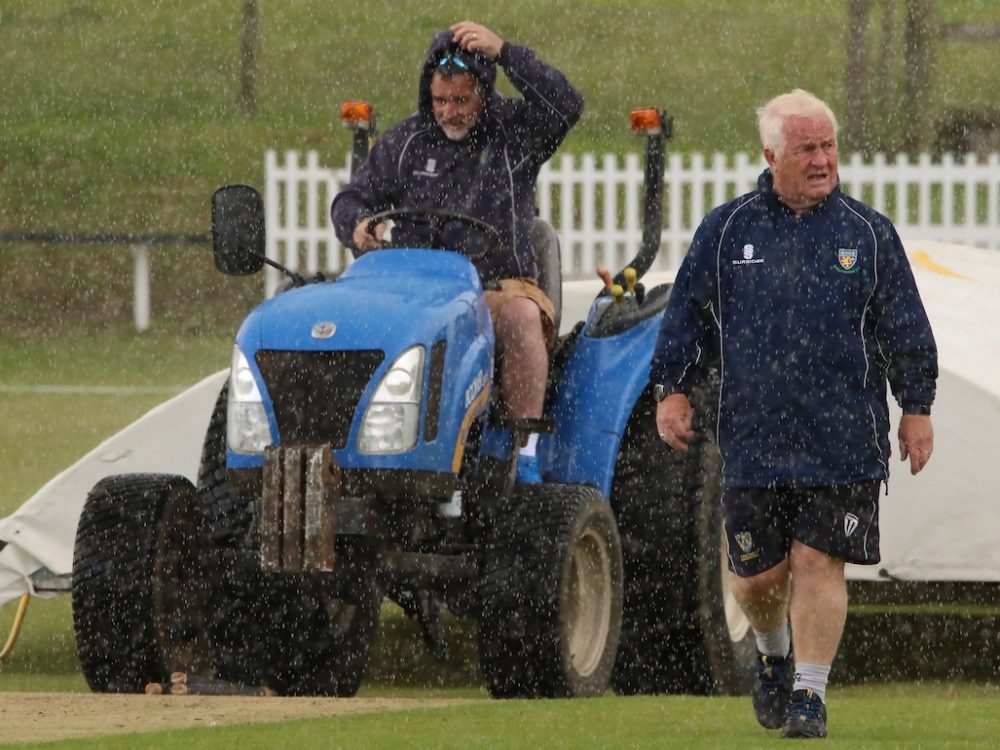 Photo: The ground volunteers were hard at work at Orleton Park on Saturday (John Cutts)

Wellington picked up a losing draw at Quatt on a rain affected Saturday afternoon. Batting first, Dan Lloyd’s side found the going difficult, struggling to get on top of the home attack. Dan Vaughan (46*) and Elliot Byram (28*) shared a second wicket stand of 56, before William Mashinge (69* off 41 balls) injected some impetus later in the innings, alongide Lloyd, who was unbeaten on 22. Wellington finished on 184-4 in their 49 overs. Quatt were left with 38 overs of their own to reply to that score, with a second, winning-draw target of 135 introduced after some mathematical calculations. Wendell Wagner produced a fine spell of 3-28 off 12 overs but his efforts could not deliver Wellington into a winning position. Chris Miller (42) pulled his side through to achieve the draw target. Mashinge added two wickets but the visitors could only claim six of the ten needed for victory as Quatt closed on 154-6.

The 2nd XI saw a similar situation in their match against Shrewsbury II, albeit with things going in Wellington’s favour. They bowled the visitors out for 183 amid the rain breaks, a terrific effort when the opposition had been on 105-2. Spinners Harjot Singh (3-33) and David Ross (2-27) polished off the innings for Matt Stinson’s side. The rain calculation saw Wellington with just 32 overs to bat, with a winning draw achievable if they made 151. Singh was clearly intent on chasing that down, hitting a quick 33 at the top of the order to get his side off to a great start. However it was Ed Bushnell who delivered a wonderful result for his side with a hard-hitting 80. Wellington passed their draw target in the penultimate over, closing on 162-7. Stinson was left to rue the rain delay which cost his side victory, but would have been pleased to leapfrog the opposition into sixth in Division One.

Nick Bevan struck 107 off 85 balls against Wellington III who were roundly beaten on their travels at Beacon. Nadeem Chohan was able to reflect on a good afternoon’s work for the visitors, claiming 4-48 in 12 overs. However, it was a story of pain for his colleagues as the Shrewsbury side racked up 305-8 in 45 overs. In reply, Simon Topper’s side could only make 105 with Phil Snape top scoring with just 16.

The 4ths were the only winners on the weekend with a convincing performance against Knockin II. The visiting side were dismissed for 163 with the slow bowlers Asad Sarfaraz (4-40) and Tushar Jani (3-37) inflicting most of the damage. Meanwhile youngster Matthew Morris continued to impress with 2-26. Stand-in skipper Richard Atherden (24) gave the innings a strong start, sharing an opening partnership of 57 with Dave Morris. However, it was the latter who kicked on, hitting 78 to guide his side to victory. Charlie Reece finished unbeaten on 30 as Wellington lost just three wickets in the chase, which they completed with seven overs to burn.

On Sunday, the 5ths made the trip to Worfield, who hit 191-7 in their 40 overs. Jacob Pryce took two wickets and Andy Parkyn claimed three as Wellington were set a demanding target for the second innings by Charlie Callaghan (81) and Jem Forrest (71) who shared a third wicket stand of over 100. Steve Oliver’s side collapsed to 39-5 in response, effectively ending their chase. However, they saved face through the efforts of Jamie Webb (31) and Kumar Singh (47) who dragged them up to 125 all out.

Finally, Wellington hosted an interclub friendly on Sunday which was a competivie and keenly fought affair. The best batting performances came courtesy of Tushar Jani (24) and Ghullam Rabani (23) and the top bowlers were youngsters Ish Vidyasankar (5-9) and Bailey Gledhill (3-15).