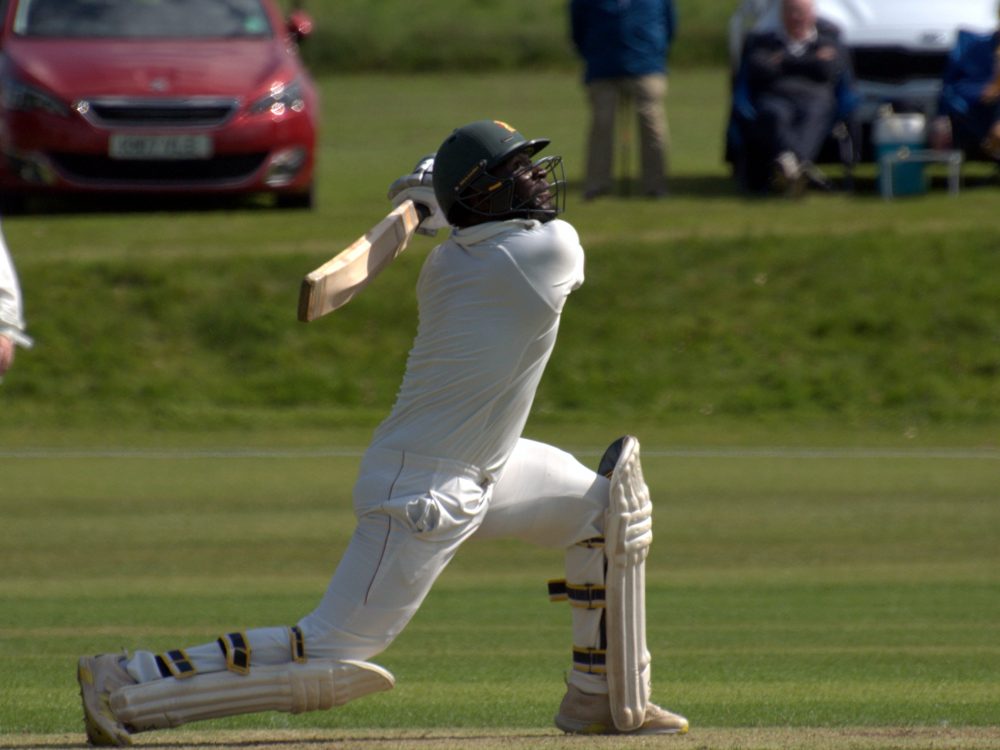 Week 5: Runs Flow For Wellington At Allscott Dan Lloyd and Will Mashinge both reached three figures in the May sunshine.

Wellington enjoyed a second win of the season as they travlled to Allscott Heath. Skipper Dan Lloyd and overseas William Mashinge combined to devastating effect, adding an incredible 203 runs in their long fourth-wicket stand. Their efforts helped deliver Wellington from a sticky situation at 36-3 to the comfort of their eventual tally of 308-4. On the way, Lloyd racked up 115 in 119 deliveries, whilst Mashinge remained undefeated on 148 off 128 balls, including six sixes. Wellington chipped away at the Allscott line-up with regular wickets afer tea. Dan Lloyd took 4-48 whilst Josh McDonald claimed 3-24 in a fine spell. The innings ended on 165 all in the 30th over to secure a handsome win for the visitors, who now sit in fourth in the table after a tricky start to the season.

The 2nds did not have such a good time of it at home to Newtown in Division One. The Welsh side got off to a flier with the bat, racking up 122 for the first wicket thanks to Matthew Knight’s 86. At 176-2 with 15 overs left, it looked like a mammoth score was on the cards. However, to their credit, Wellington dragged themselves back into the match by restricting the scoring. Newtown closed on 230-3 from their 45 overs. Opener Vipul Bhaskar gave Wellington a good start with his 34; however the chase lacked a lengthy partnership against a strong attack. When Harjot Singh was out for 29, attention switched to holding out for a draw. Steve Pitchford hit 35 as Wellington closed on 158-7.

The young 3rd XI made the trip to St Georges II and will have been disappointed not to chase down the hosts’ target of 158. Wellington had 50 overs to get the runs, but slumping from 90-2 to 138-9, they too had to contend themselves with holding on for a draw. Duncan Taylor (36) and Ed Bushnell (31) led the way with the bat in the second innings, but it was left to youngster Shaun Mendis and Dhairya Jani to frustrate the St Georges’ bowlers in the end. In the first innings, Alex Fox’s 4-21 in 10 overs was a fantastic return, whilst Matt Earley also picked up two wickets.

The 4th XI faced strong opposition in the form of Whitchurch II, who defeated them by six wickets at Orleton Park. Stand-in skipper Rich Atherden stepped up with the willow, hitting 84 not out after finding himself at the crease at 5-2. With some support from Charlie Reece (17), the 4ths made it to 153-5 off their 40 overs. Wellington were definitely in the game with Whitchurch on 74-4, but Ed Watson-Jones (45*) and Dave Wheeler (40*) combined to win the match from there. Youngsters Matt Morris (2-23) and Jacob Pryce (2-40) shared the four wickets.

On Sunday the 5th XI had a terrific win at Wem III, chasing down 148 in the final over. Wem’s scoring was held in check by a solid bowling performance, with the timeless Andy Parkyn taking 2-24. The hosts finished on 148-6 in their 40 overs. Neil Bushnell was run out for 21 in reply – one of two run outs – as Wellington’s chase began to falter. However a seventh wicket combination of Nick Oliver (43*) and Kumar Singh (20*) saw Wellington home with five balls to spare.

Finally, a Wellington friendly side travelled to face Springhill in Wolverhampton on Sunday and rounded off a good weekend for the club. The home side were dismissed for 128 with Kootalai Srinivasan collecting 3-9, Jack Edge 3-20, and Dave Good 2-19. Wellington chased that total down for the loss of six wickets with Oli Tufft (41*) leading the charge. Paul Willis (22) and Vrishab Eli (18) were also in the runs.