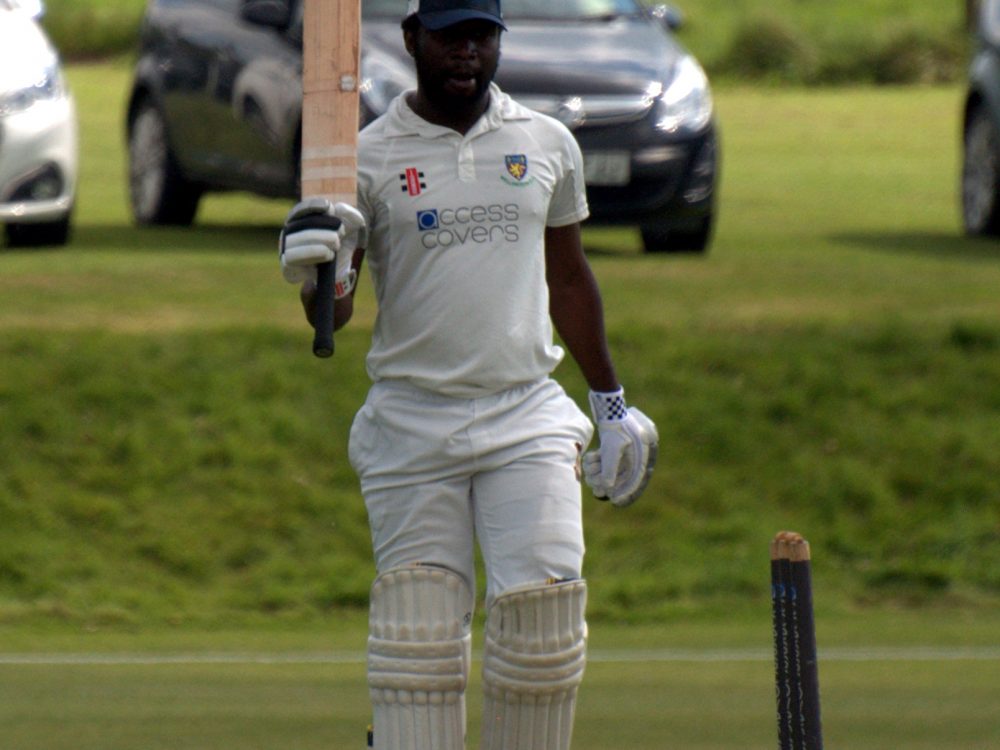 Wellington recorded their first Premier Division win of the season at the fourth attempt, defeating Shelton at Orleton Park. Losing in-form captain Daniel Lloyd first ball, it appeared that the hosts’ early season batting woes might resurface, but his charges responded positively to finding themselves on 18-2. Josh McDonald hit 36 in a third-wicket partnership of 62 with Luke Goring. The latter fell tantalisingly short of his first fifty when he was dismissed for 47. However, it was William Mashinge who set up a big score for Wellington. His impressive and unbeaten 92 off 90 balls, with support from James Flynn (32*), catapulted his side to 242-6 off 50 overs. Shelton’s response was held together by Dan Walker (60) but the opener saw wickets fall steadily at the other end, as they slipped to 91-6 at the half way stage. However a drawn-out seventh wicket stand with George Manders (25) appeared to offer Shelton hope of a draw. Dan Lloyd eventually made the breakthrough, picking up 4-28 on the day. But it was Mashinge (3-37) who completed the win with the final wicket of Walker, caught impressively by Sam Bloor to the delight of the watching crowd.

The 2nd XI faced the same opposition – Shelton II – on the road and had a much more straightforward victory. Batting first, the hosts were 37-0 before the Wellington bowlers sparked a tremendous collapse. Five wickets for captain Matt Stinson (5-30), two for Faheem Chohan and 3-4 for Martin Weill set up a simple sounding chase for the batsmen, albeit on a tricky wicket. Wellington got home for the loss of three wickets with debutant Vipul Bhaskar (24) and the evergreen Ian Murphy (20*) helping to complete the win.

Back at Orleton Park, the 3rds welcomed Ludlow II who won the toss and invited Wellington to bat. Duncan Taylor (45) and Richard Atherden (37) again put on a solid opening stand, but after they fell the innings began to wobble. Matt Earley (31) and Ben Pilkington (51*) put things back on track and, at half-way, the team would have been pleased to post a total of 198-5. As it happened, the form of Wellington’s opening bowlers put the result beyond doubt as Indy Dhaliwal (5-31 off 10 overs) and Akyb Zadran (2 for 14 off 7 overs) ran through the top order. Despite some fun and games down the order, Ludlow were unable to recover and finished on 118 all out.

The 4th XI made the long trip to Alberbury II and won the Division Five contest in short order, blowing the hosts away for just 36 runs. Phil Snape with 3-7 and Shaun Mendis with 4-6 enjoyed their day out. Wellington then knocked the runs off for just one wicket in just eight overs, with Snape the man out for 21.

On Sunday the 5th XI  made the short trip to Wroxeter where they were failed to chase down the home side’s total of 166. Kumar Singh and Jamie Webb took three wickets each in the first innings, but it looked a challenging total on the day. Umad Hussain (27), Jonathan Evans (26) and Webb (22) all impressed with the bat, marshalling their team to 100-3, but the team ultimately found the target outside of their reach, slipping to 134 all in pursuit of victory.