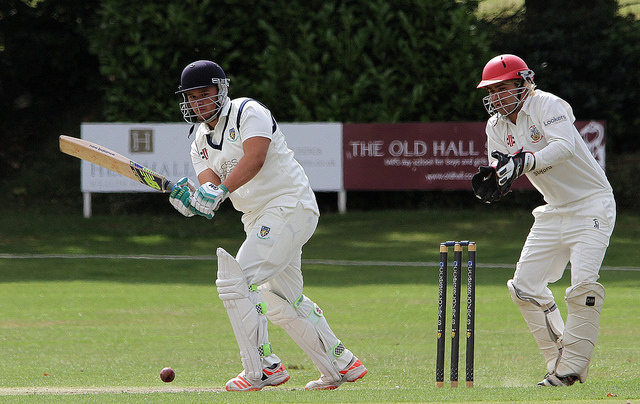 Wellington 1st XI played their last home fixture of the season on Saturday, but unfortunately for them it ended in defeat to Whitchurch. Half centuries from Maz Hasnain and Andy Jones helped the visiting side to a tally of 194 all out. As it happened, the Wellington bowlers did well to rein in Whitchurch’s start of 136-1. Tom Ellis claimed 5-38, whilst Dan Lloyd and Steve Brooks both took two wickets. In reply, Tom Masters anchored the innings with 33 with support from James Flynn (21). However both players fell with the score on 75, along with captain Wendell Wagner, as the match was turned on its head. Sam Roberts’ 23 could not reverse the trend and Wellington lost by 55 runs.

Wellington 2nds made the trip to face champions elect St Georges in Division One in a match that went true to form. The table-toppers piled on the runs in the first innings, led by Mat Batkin’s 128 at the top of the order. They finished on 259-7 in their 45 overs. For the bowling side, Matt Stinson, Faheem Chohan and Martin Weill all picked up a brace of wickets on a difficult afternoon. Nevertheless Wellington held on for a draw thanks to vigils from Elliot Byram (45) and captain Alex Taylor (31) and closed on 156-8.

The 3rd XI kept up their hunt for promotion from Division Three with a home win over Willey. Dan Ashton (51), Steve Pitchford (32) and Simon Topper (27) helped the hosts, batting first, to a score of 193-9. After tea, the visiting side made their way to 146-3, despite Indy Dhaliwal’s 2-22, and looked well placed to go on and win the match. However, an inspired spell of 6 for 16 from Harjot Singh grabbed victory from the jaws of defeat. Willey lost their last seven wickets for just 11 runs, collapsing to 157 all out.

Wellington 5ths are also involved in the promotion hunt in Sunday Division Two and strengthened their chances with a narrow win over Bomere Heath III. Four wickets for Mo Bhatti, three for Andy Parkyn and two for Phil Snape helped the hosts bowl out their opposition for just 121 in 35 overs. Bhatti added 27 in the second innings, but when he was dismissed his team were in trouble on 57-5. Nick Oliver (19) and Evie Anderson (15) helped steady the ship, before Akhil Srinivasan (13*) and captain Steve Oliver (6*) hauled the team over the the line for a two wicket win.

The final match of the weekend was a keenly fought Sunday friendly between Wellington and Brewood at Orleton Park. Dhairya Jani (28), Jamie Webb (25), Asad Sarfaraz (36) and Lewis Gough (27) propelled Wellington to 172 all out in just 29.3 overs. Brewood advanced carefully to their finishing total of 142-6 – 31 runs short of victory – after batting their full 40 overs.