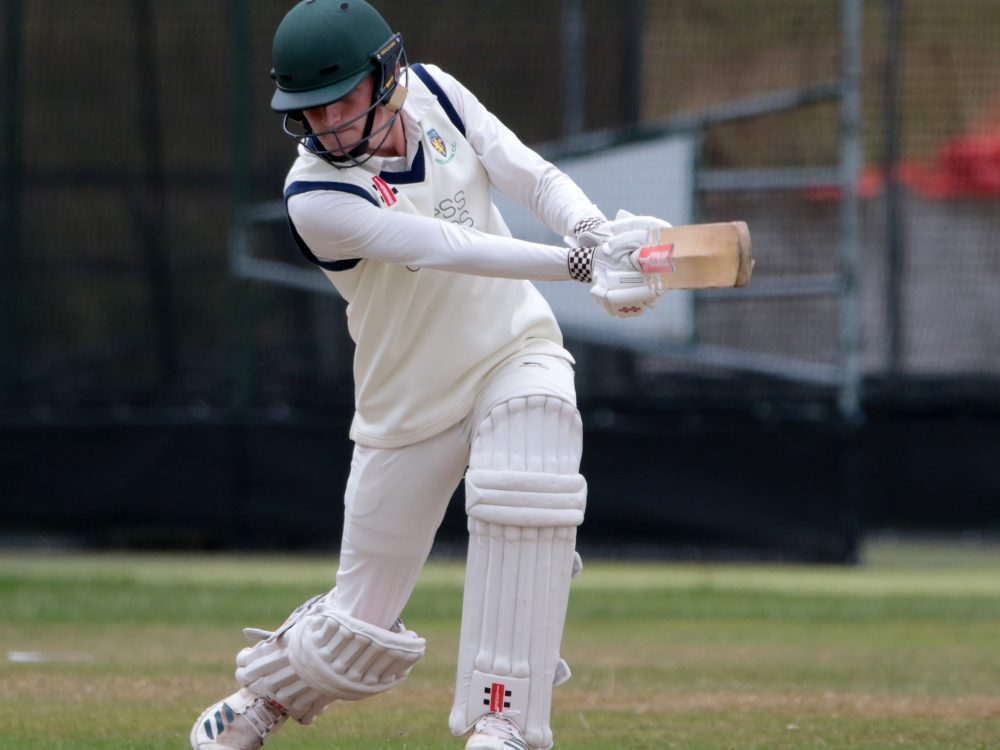 Week 16: Saturday Sweep For Wellington It was a terrific weekend for the club with some emphatic wins on Saturday.

Picture: Will Lewin (37) top-scored for the 2nd XI at Newtown (credit: John Cutts)

Wellington claimed a comfortable win at home to Allscott Heath to make it back-to-back wins in the Premier Division. Dan Lloyd elected to bowl first in the match and saw the opposition perform well in the early stages, reaching 65-1 with relative ease. There then came a large collapse, with Allscott slipping from there to 107-8 as Wendell Wagner and Ben Pilkington claimed two wickets each. There then followed some tail-wagging from the visitors, but the innings was eventually wrapped up for 156 with Will Mashinge also claiming the second of two wickets. Hugh Morris (25) and Dan Vaughan (16) put on an opening stand of 44 in reply, before skipper Lloyd (48*) and Mashinge (29*) combined to take Wellington to a seven-wicket win with 13 overs to spare.

The 2nds continued their great recent run with a win on the road at Newtown. An early run-out for the home side set the tone for a game which Wellington dominated. Martin Weill, with 3-31, was the pick of the bowlers, but captain Matt Stinson, spinner Hamza Bhatti and Steve Brooks all bagged a brace of victims. Newtown’s score of 133 offered the prospect of a straightforward win – and Wellington’s batters made no mistake. Will Lewin top-scored with 37, whilst Alex Brasenell saw his side home to a five-wicket win, finishing unbeaten on 21. The results means Wellington now close the gap on the top sides in Division One with seven matches to play.

Wellington III enjoyed a much-needed win at home to St Georges II. Jordan Hyde (3-38) got his side off to an excellent start and the early advantage was hammered home by stand-in skipper Dave Ross (4-16). St Georges struggled to put any substantial partnerships together and were ultimately dismissed for just 121. However, the opposition responded with a couple of early wickets and Wellington had Steve Lamb to thank for holding firm. His 46 held the innings together, and with support from Dan Pitchford (14) and Ian Murphy (17), the team progressed toward victory. A flurry of three late wickets sent home nerves jangling, but Alex Fox (11*) held his nerve to earn a three-wicket win.

Pat Howells’ 4th XI earned a crushing win over table-toppers Whitchurch II to boost their promotion hopes in Division Five. In a game reduced to 30 overs per innnings due to the rain, Wellington hit a healthy total of 179-8. Dave Morris (20) and Vrishab Eli (22) gave the innings a healthy start, before Adam Marshall (38) and Kamal Aluthgedara (60) accelerated the scoring. Matt Morris (3-22) and Akyb Zadran (3-17) then blew the hosts away with the new ball in a devastating start to the innings. Phil Snape finished the job with 2-1 as the leaders were dismissed for just 52 in 14.3 overs.

On Sunday, Wellington V restricted visitors Worfield III to 183-4 in the first innings of their Sunday Division One contest. It was a decent all-round performance from the bowlers who did well to limit the scoring after a good start from the visitors. In reply, Akhil Srinivasan scored 35 at the top of the order before Umad Hussain (28) and Jamie Webb (66) combined to add a hundred for the fourth wicket. Their efforts took Wellington to the brink of victory, but they were both dismissed as the team lost four wickets for one run in the dying stages. As it happened, it was Worfield that held their nerve to secure a three-run victory in a great contest.

Finally, Woore were welcomed to Orleton Park for a friendly match on Sunday afternoon. Wellington managed to make 187-6 in the first innings. Johan Estherhuizen scored 49, whilst youngster Libby Ross hit a unbeaten 27 in her first match. Sam Kennedy also contributed with 22. However, Woore proved too strong in reply, despite opener Sajin Muraleedharan picking up 4-35 with the new ball. Those were the only wickets Wellington claimed as the opposition picked up a six-wicket win.