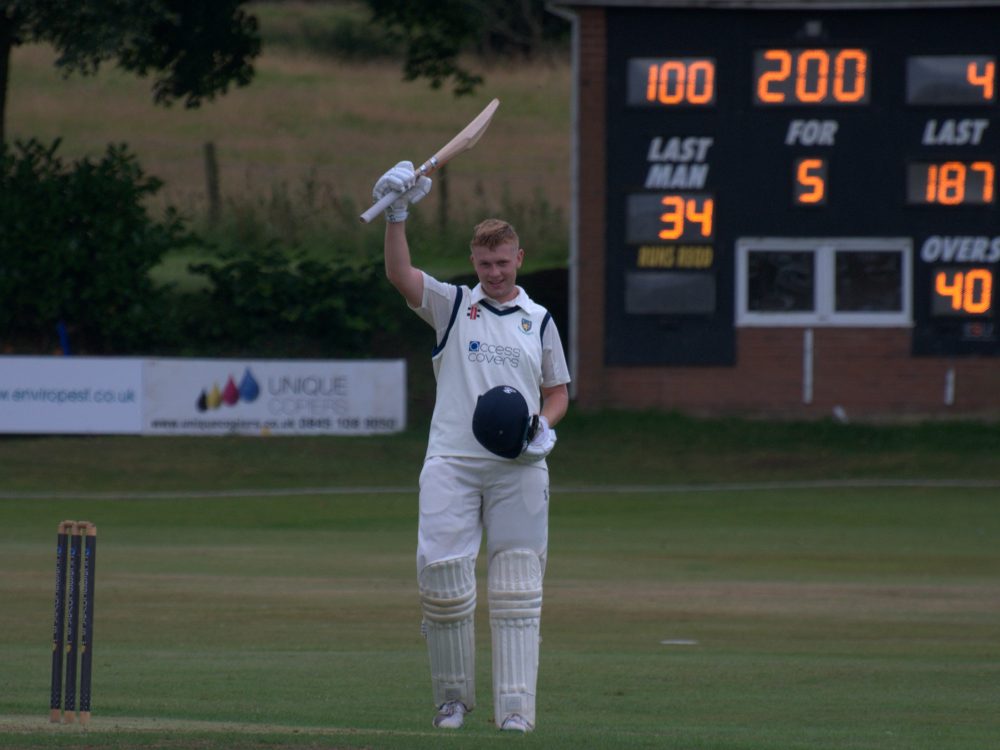 Week 16: A Tale Of Three Tons Luke Goring, Harjot Singh and Dan Pitchford all hit centuries on a brilliant weekend.

Wellington came within a shot of chasing down 206 for victory at Sentinel, falling just four runs short in an exciting finish in the SCCL Premier Division. Captain Wendell Wagner led by example with an unbeaten 86 – but ultimately his efforts were in vain as his side closed on 202-9 in their 50 overs. Tom Masters hit 37 at the top of the order, whilst earlier in the day Tom Ellis (3-41) and Dan Lloyd (2-21) returned the best figures for the visiting side.

Luke Goring hit a powerful 104 off just 102 balls at home for the 2nds against Division One’s bottom side Pontesbury. Daniel Vaughan (28) and Hugh Morris (34) offered terrific support as Wellington registered 209 in the first innings. After the break, the hosts found a hero with the ball as Matt Stinson claimed 5-25. Braces from his colleagues Morris and Hamza Bhatti led the seconds to a 90-run win.

The 3rd XI also had a centurion in their ranks in the form of Harjot Singh, who put in a devastating knock of 150 (off 137 balls, 19 fours, 5 sixes) on the other field. Patrick Ward Clayton’s 56 was an eye-catching supporting role. Opponents Madeley 2nds had no answer to the home side’s powerful hitting and were left with a huge chase after the innings closed on 289-9. Doug Reynolds responded for the visitors with a knock of 93, but it was ultimately in a losing cause. Singh, Lewis Gough, Matt Earley and Ben Pilkington all picked up two wickets each as Madeley were dismissed for 176.

Amazingly that was not the highest individual scorer of the weekend, which in fact came in the fourth team’s encounter at Alberbury 2nds. Dan Pitchford hit a breathtaking 156 (off 122 balls, 18 fours, 7 sixes) for Pat Howells’ side. He shared an opening stand of 240 with Duncan Taylor (61) as Wellington captialised on being asked to bat first. Ian Murphy injected some late energy with a rapid-fire 33* as his side registered a total of 284-3 in 40 overs. Opening bowlers Nadeem Chohan and Alex Fox picked up two wickets each, whilst David Ross claimed 3-13. Wellington found the final wicket in the last over, as Alberbury succumbed to 134 all out.

On Sunday, the 5th XI enjoyed a fantastic win on the road at Bridgnorth 4ths. Bowling first, Wellington restricted their opposition to 180-8 with Umad Hussain (3-31) the pick of the bowlers. At 56-4, the side batting second looked to be second favourites, but Akyb Zadran, who had earlier claimed two wickets, had other ideas. His clean-striking 73 propelled his side towards victory with support added from Kumar Singh (34*). Wellington won the match by three wickets with three overs remaining.