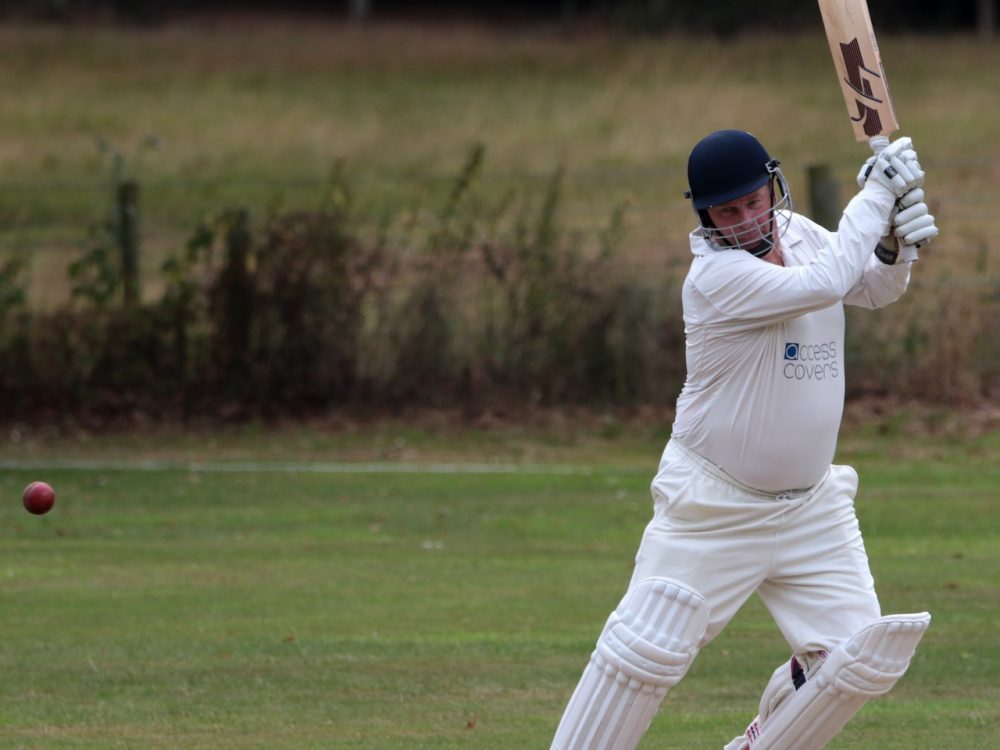 Picture: Duncan Taylor smashes another four as the 4ths piled on the runs against Alberbury (credit: John Cutts).

Wellington returned to winning ways with an 18 run victory at Shelton. Daniel Vaughan hit 36 at the top of the order for the visiting side, but it was overseas star William Mashinge who pushed his team on towards a competitive total, whacking 63 from 65 balls. Wendell Wagner (31) and James Flynn (23) provided the support in the latter stages as Wellington reached 227-7 in their 50 overs. Mashinge picked up two wickets early on in the reply before spinners Dan Lloyd (1-20 off 10 overs) and Wendell Wagner (2-41) strangled the middle order. Mashinge returned to complete his five-fer (5-47) and a well-deserved victory for his side. Shelton were dismissed with three balls of the match remaining.

Meanwhile, at Orleton Park, there was a meeting of Wellington and Shelton’s second XIs, which went decisively in favour of the home team. Matt Stinson’s team restricted the visitors from Shrewsbury to 170 – all out off the last ball of the first innings. Wickets were shared between Steve Brooks, who took 3-40, and Stinson, Hamza Bhatti and Lewis Gough who all claimed two victims each. Wellington’s reply looked to have briefly faltered at 39-3, but Vipul Bhaskar and Luke Goring were in mood to hang around or let the pressure build. Bhaskar hit 78 off just 52 balls to continue his fine recent form, whilst Luke Goring eclipsed even that rate of scoring, hitting 67 off 36 deliveries, including seven fours and three maximums. Wellington’s chase was completed in less than 20 overs with both men finishing unbeaten.

The 3rds were disappointed to suffer a three wicket defeat on the road against Ludlow II. Simon Topper’s side had Harjot Singh to thank as his 57 runs compensated for low scores across the top order. Having lost the toss, and at 94-6, Wellington were in real trouble, but Alex Fox’s 31 at least allowed them to post something on the board.  154 felt like a low total but the bowlers got themselves into the match by claiming four early wickets. However, William Wood’s 71 turned the game back in the host’s favour – and they eventually secured the win with three wickets to spare. Singh was also the pick of the bowlers with 3-27, whilst Matt Dickenson picked up 2-22.

Centurion Dave Morris led the 4th XI to victory in their home match against Alberbury II. He shared an opening partnership of over 200 with Duncan Taylor, contributing 124 of the runs. Taylor (77) also impressed on a great day for Pat Howells’ side. Vrishab Eli (10*) and Matt Pitchford (20*) were the only other Wellington players to get a bat as the team smashed their way to 280-2 in 40 overs. Alberbury made 172 all out in response to that huge total. Phil Snape took 4-38 whilst fellow spinner Jack Edge picked up two wickets for 36 as Wellington jumped to third in the table.

Unfortunately the 5th XI and Friendly XI matches on Sunday were both lost to the weather with no play possible.