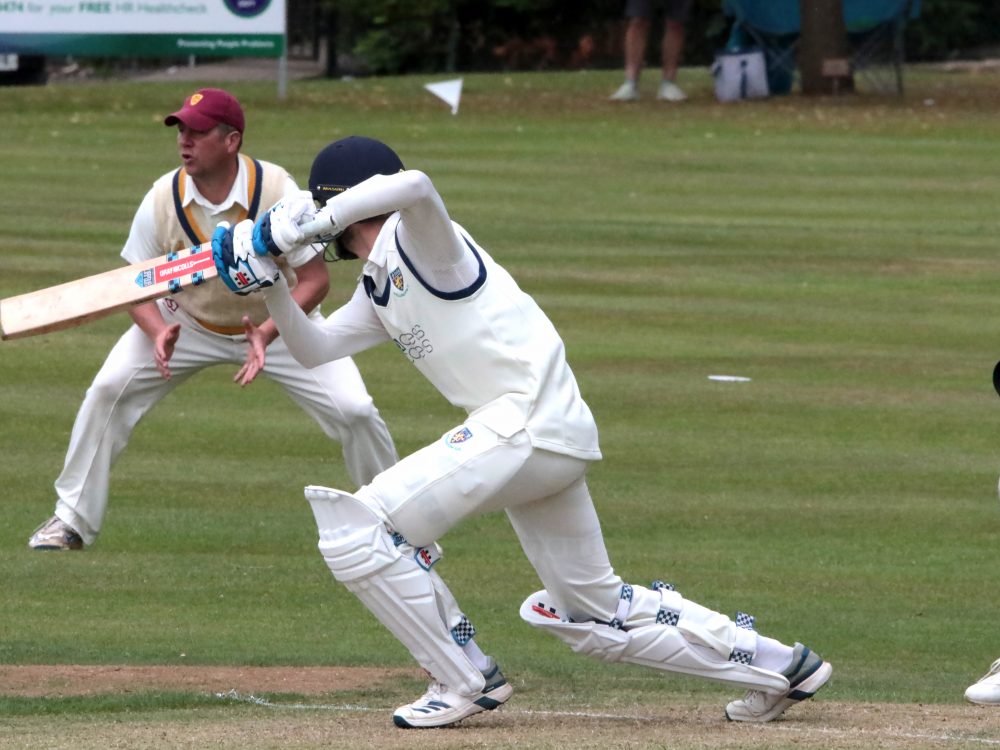 Wellington faced cross-town rivals Madeley on Saturday – but for the second week in a row they were left frustrated by the weather. A torrential downpour just after the half-way stage rendered the Park Street pitch unplayable and prematurely ended Dan Lloyd’s side’s run-chase on 31-0. Dan Vaughan (13*) and Josh McDonald (12*) were in pursuit of Madeley’s total of 235-5, a tally boosted in large part by Andrew Lloyd’s 104 for the hosts. However, the reply ended after just seven overs after the umpires called time on procedings.

The 2nd XI faced Chelmarsh at home in Division One. Wellington batted first in this encounter and set an imposing total of 222-9 in 45 overs. Opener Hugh Morris (24) set the tone at the top of the order before Ian Murphy stamped his mark on the match with a fine 45. Hamza Bhatti (25) and skipper Matt Stinson (37) pushed the score up above 200 and to make their side favourites in the contest. Stinson then ran through the top order, claiming four wickets as Chelmarsh slumped to 29-5. However, Connor Glendinning (74*) and Matthew Evans (40) refused to read the script, sharing a sixth-wicket stand of 88 to get themselves back in the match. When rain reduced the game by eight overs, the visitors were given a lower total of 161 to claim a winning draw. They finished on 170-7, taking the lion’s share of the points and leaving Wellington thoroughly brassed off.

Forton provided the opposition to the 3rd XI at Orleton Park, who could only secure a losing draw on the day. Oliver Wilson’s 91 set the groundwork for the opposition’s total of 210-8 in 45 overs. For their part Wellington were left to regret several spilled catches on a frustrating afternoon. Indy Dhaliwal, Harjot Singh and David Ross all claimed two wickets each. Henry Morris finished 62 not out in the second innings, but in spite of several starts his colleagues were not able to challenge the target. Wellington closed on 156-8.

There was a terrific win for the 4th team on the road at Wroxeter, where they faced Shrewsbury III. Dave Morris (22) and Patrick Howells (22) started well for the visitors before a middle-order collapse threatened to undo the innings. However this was a day when the tail wagged as Matt Morris (31), Dhairya Jani (35), Jordan Hyde (20) and Nick Oliver (21) all impressed down the order, leaving Wellington with a solid total of 214-4 in 40 overs. Despite opposing skipper Dylan Edwards’ 109, Pat Howells’ side took regular wickets to secure a 24-run win. Shaun Mendis claimed his first senior five-fer (for 42) and Hyde and Howells took a brace each.

Wellington 5ths face Wroxeter’s second string at Orleton Park on Sunday in a gripping encounter. The home side, batting first, slipped to 47-5 but recovered thanks to Kumar Singh’s fifty. His fine knock ensured Wellington had a total on the board to defend – 142-9 off 40 overs. Singh then claimed three early wickets but Wroxeter still looked set for victory when they reached 108-5. However Akyb Zadran (2-28) picked up two wickets in two balls to pile the pressure on in the latter stages. It was left to Andy Parkyn (3-49) to unpick the tail in dramatic fashion as the match ended in a tie.