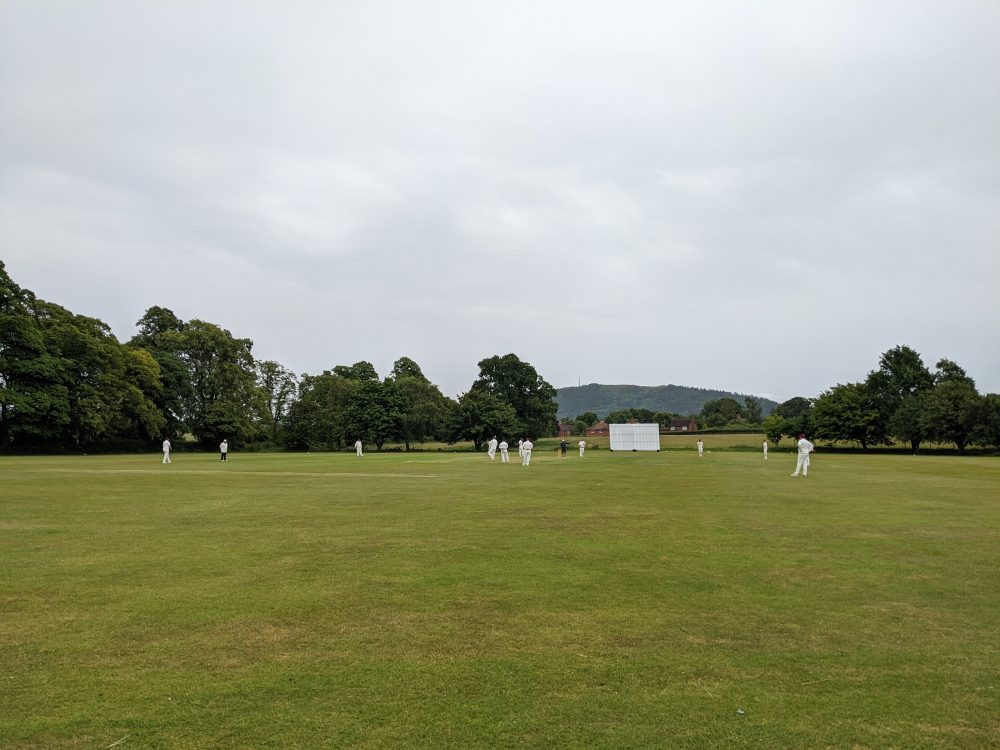 Week 10: Soggy Saturday Scuppers Play It was a miserable Saturday afternoon in Shropshire, seeing the abandonment of most cricket in the area.

Amongst those frustrated were Wellington 1st XI, who would have felt they had got themselves into a winning position at home to Oswestry when play was stopped. The hosts were invited to bat first having lost the toss and would have been pleased with their total of 207-6 in a reduced innings of 45 overs. Dan Vaughan (38) and Elliot Byram (36) were able to progress the scoring to 71-1, offering a platform for Dan Lloyd (44 off 31 balls) to inject some momentum into the match. Wendell Wagner was unbeaten at the end of the innings on 38. After the turnaround, Wellington got off to an excellent start with the ball, reducing the visiting side to 34-4. However at that point the threatening weather closed in and sadly the match was abandoned.

Wellington 2nds made the trip to Bomere Heath in Division One. Vipul Bhaskar (43) and Alex Taylor (37) shared a great opening stand against high-flying opposition, before the wickets began to tumble. Certainly Wellington’s total of 164 all out was competitive on the day, but sadly the story ended there as the weather prevented Bomere Heath’s batsmen from taking to the crease.

The 3rds did manage to complete their game at Wroxeter, but not in the way they would have liked. In a game reduced to 30 overs a side, the visiting batsmen failed even to bat their overs, slumping to 64 all out. Duncan Taylor (12) and Kamal Aluthgedara (11) were the only batters to break double figures, whilst Charlie Haylett (5-13) enjoyed a day to remember. Wellington’s bowlers claimed four wickets in the chase, but it proved a straightforward victory for Wroxeter who got them in less than 20 overs.

Back at Orleton Park, Wellington 4ths’ game against Much Wenlock was in the balance when the rain called time on procedings. Their Division Five contest was reduced to 35 overs a side with the hosts batting first. Dave Morris (26) and son Henry (34) contributed the bulk of the scoring as they set a competitive 150-6 in trying conditions. Wenlock got off to a strong start, finding themselves on 60-1 in the 13th over when the deluge came.

Sunday was thankfully a much better day for playing cricket and the 5th XI’s trip to Shrewsbury IV was played to its conclusion. It was unfortunately a one-sided affair. Shrewsbury hit 220-9 in their 40 overs, a mammoth score. Raffay Bhatti (3-38) shared the wickets with his father Mo (2-18) for Wellington. Opener Oli Tufft (27) was the mainstay of the second innings, but he was powerless to prevent the wickets tumbling at the other end. Only Nick Oliver (18) troubled the scorer as the 5ths were rolled out for just 89.

Orleton Park hosted a friendly in Sunday’s other fixture as a Wellington team welcomed Walsall Heath to Shropshire. In a spirited and enjoyable game, the home team lost by a wide margin, but the game was not without its highlights. Shehan Gunawardena retired not out on 50, Vrishab Eli hit a fine 39, and captain Nadeem Chohan made 30. Unfortunately their 158-7 was in response to a large total of  275-4 from the visitors, who won comfortably.