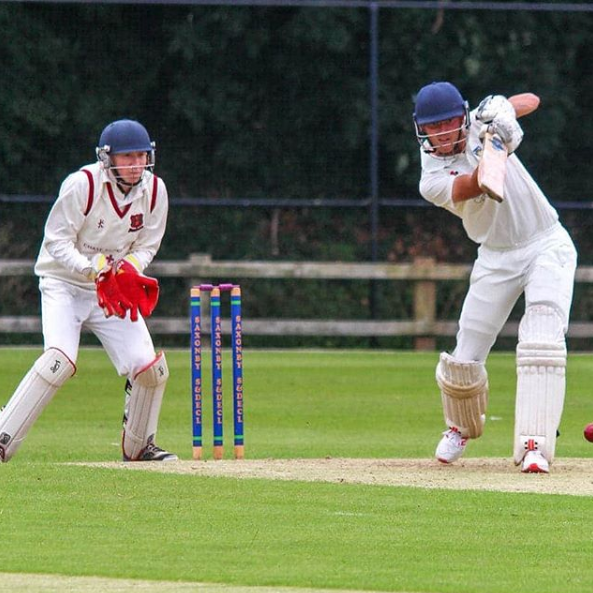 Photo: Tom Ellis at the wicket for the 1st XI at Whitchurch (Instagram: @whitchurchcricket)

It may have taken until late July for the Henshalls Shropshire County Cricket League to get underway, but for Wellington the wait was certainly worth it. Spectators at Whitchurch’s Heath Road ground witnessed a remarkable come-back from Wendell Wagner’s 1st XI side who appeared down-and-out at 29-6 in the first innings. From there, the home team might understandably have expected a comfortable victory to ensue, but opener Tom Masters had other ideas. Having watched the wickets tumble at the other end, he forged partnerships with two debutants in Tom Ellis (48) and Ben Byram (51) as Wellington counter-attacked in style. Masters carried his bat for an unbeaten 64, helping move his side beyond respectability and towards an imposing 40-over total of 191-8. Ellis (2-26) claimed the much-prized wicket of Maisam Hasnain to put his side on the front foot in the second issues. Continued pressure from fellow seamers Sam Bloor (2-20) and Wendell Wagner (2-30) ensured that Whitchurch stayed at arm’s length throughout the chase. The hosts ended up on 165-8 as Wellington kicked their season off with the most unlikely of victories.

Wellington II began their season with a home fixture against their counterparts from Bridgnorth. Batting first, the visitors were dismissed for 157 on the final ball of their 40-over innings. Two debutants were amongst the wickets for Wellington – Henry Morris (2-30) and Harry Slater (3-31) – whilst Steve Brooks claimed four catches in the field. Luke Goring (32) and Steve Lamb (41) shared a solid opening stand in the second innings, but Bridgnorth kept the pressure on by claiming wickets at regular intervals. Both sets of players were forced off by rain with the match delicately poised; however, when they returned Alex Taylor (12*) and Adithya Manigandan (18*) held their nerve to steer their side to a five-wicket win with just nine balls left.

Church Aston provided the opposition for the 3rd XI and left with maximum points after edging a close contest at Orleton Park. Alex Brasenell (46) and the impressive youngster Josh McDonald (69) led Wellington to a competitive first innings score of 190-6 in their 40 overs. However, Avi Mathur (58) got their opponents off to a strong start in the run chase before Hugh Morris (3-22) picked up the vital wicket. However, the platform had been laid for Gurjit Saini (59*) to complete a five-wicket victory for his side after Wellington dropped a series of important catches.

Fourth XI captain Patrick Howells enjoyed his first game in charge as his side ran away as comfortable winners at Church Stretton. The home side were dismissed for just 92 in 24 overs as the visiting Wellington bowlers evidenced no early season rustiness. Ben Pilkington was the pick with 3-8 off five overs, whilst Phil Snape also claimed three wickets. Elliot Byram (24) contributed at the top of the order, but as wickets tumbled it was left to captain Howells (21*) and fellow veteran Ian Murphy (27*) to complete a five-wicket victory.

The 5th team began their campaign away to Newport III on Sunday afternoon. Lewis Gough took 3-15 and Adam Marshall 2-14 as Wellington did a good job restricting the hosts in the first innings. Newport scored 127-8, but that tally grew on the scoreboard after a slew of early wickets. Gough (29) steadied the ship, before Kumar Singh (29*) and Faheem Chohan (36*) eventually struck a match-winning partnership.

The 6th XI made the trip over to St Georges IV and came away victorious after some impressive performances from their young players. William Casey-Fitton (33), brothers Akash and Akhil Srinivasan (both 22), and debutant Alex Fox (20) set Wellington up for a total of 137 all out in the friendly contest. After the break, Casey-Fitton,  Fox and Jamie Webb all claimed two wickets, whilst Jovan Uppal (3-6) provided the star turn. St Georges were dismissed for 97.